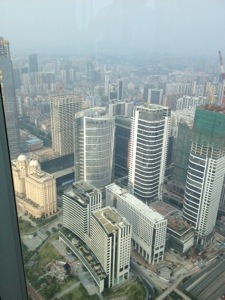 In Guangzhou (population 11 million) the “New Town” area is a brand new financial district serving the rapidly growing City. New Town has been built entirely since 2005, with most buildings opening since 2010. Its centerpiece is the 103 storey International Financial Center (IFC), currently the 2nd tallest building in the city. IFC, despite being a very prominent and impressive building did not pursue LEED or China Green Label certification.

Chinese developers are about to take a much more serious interest in building performance and certification.

“On the green building side, according to the Building Energy Efficiency Program under the 12th Five-Year (2011-2015) Plan formulated by the Department of Building Energy Efficiency & Technologies under the Ministry of Housing and Urban-Rural Development (MOHURD), between 2011-2015, the accumulated area of all new buildings nationwide will reach 4-5 billion square meters. Meanwhile, the Ministry of Finance and the MOHURD have jointly issued the “Recommendations on Speeding up the Development of Green Buildings in China”. The objective is that by 2015, by establishing a fiscal incentive mechanism and promoting the advancement of related technologies and industries, the total area of new green buildings will exceed more than1 billion square meters, and by 2020, the area of green buildings will account for more than 30% of the total area of all new buildings. The fast urban development in China increases the demand on green buildings and energy efficiency, where we consider containing abundant business opportunities.”

The fiscal incentive mechanism described in the above quote is based on China’s 3 Star Green Label program, which according to Dr. Li Congxiao (www.csus-gbrc.org), combines features of LEED with BREAM, and requires on-site inspection by Green Label prior to certification. Certified buildings are then awarded government funds based on certification level. Three star buildings are awarded RMB80/sqm , and two stars will receive RMB45/sqm.

Only four projects have been awarded 3 stars, Green Labels highest rating. Two of these projects were built under the MOMA brand by Modern Land (Modern Green), including MOMA Beijing and Nanchang Mantingchun MOMA. The other projects are the fourth phase of Shenzhen Vanka Town, and Suzhou Landsea International Town.

China is getting serious about Green Buildings, and with over 1 billion Square Meters of new Green construction expected to be built from 2011-2015, they are crying for Green and Clean technologies.