Is Net Operating Income the silver bullet for our global climate emergency?

Cities are responsible for over 70 percent of global energy consumption and CO2 emissions, mostly from buildings, marking a significant opportunity to focus climate change mitigation and adaptation efforts on dense urban environments.   Architecture2030 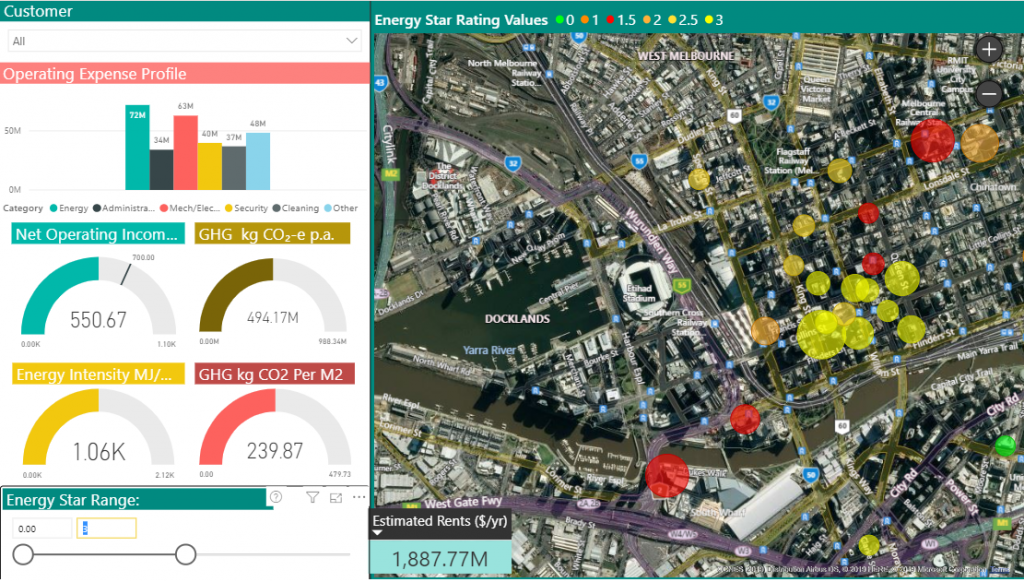 This week, the City of Burnaby (Canada), and hometown for my three children, declared a climate emergency...

…joining dozens of other Canadian cities who…following the Canadian government’s declaration on June 17th…have all passed their own emergency declarations.   The City of Burnaby set a short term goal of reducing carbon emissions, including a 45% reduction by 2030.

…that’s 45% reduction across the board, from thousands of buildings across the city.

For the sake of future generations we need to do this.  But how?

Improve on an effective EUI/GHG model proven in Australia

Our experience in Australia demonstrates that  >45% reduction in GHG emissions from thousands of commercial buildings can be achieved!

Earlier this year, BuiltSpace was invited to participate in SBC Energy Australia, an energy focused accelerator program, where we’ve been fortunate to work with some of the top Australian facilities and energy companies.  While in Australia we learned more about NABERS, Australia’s mandatory energy/water efficiency program for  commercial buildings over 10,000 SqM (> 107,000 SqFt).   I found what seems to be a very successful program to improve energy efficiency across the major commercial buildings throughout Australia, and one that aligns well with our core vision.

NABERS is performance based, with measured results for each building that translate directly into real financial value to building owners.

One thing immediately stood out:  Australian buildings are reported to have much lower energy intensities than similar Canadian or American buildings.   The Of median American office building, according to US government survey data, consumes the equivalent of 181 kWh/SqM, the median Australian building over 10,000 SqM, based on mandatory reporting, requires only 97 kWh/SqM.    I also found that 96% of NABERS rated buildings have better EUI (Energy Use Intensity) than the median building in the US (Energy Star National Median). 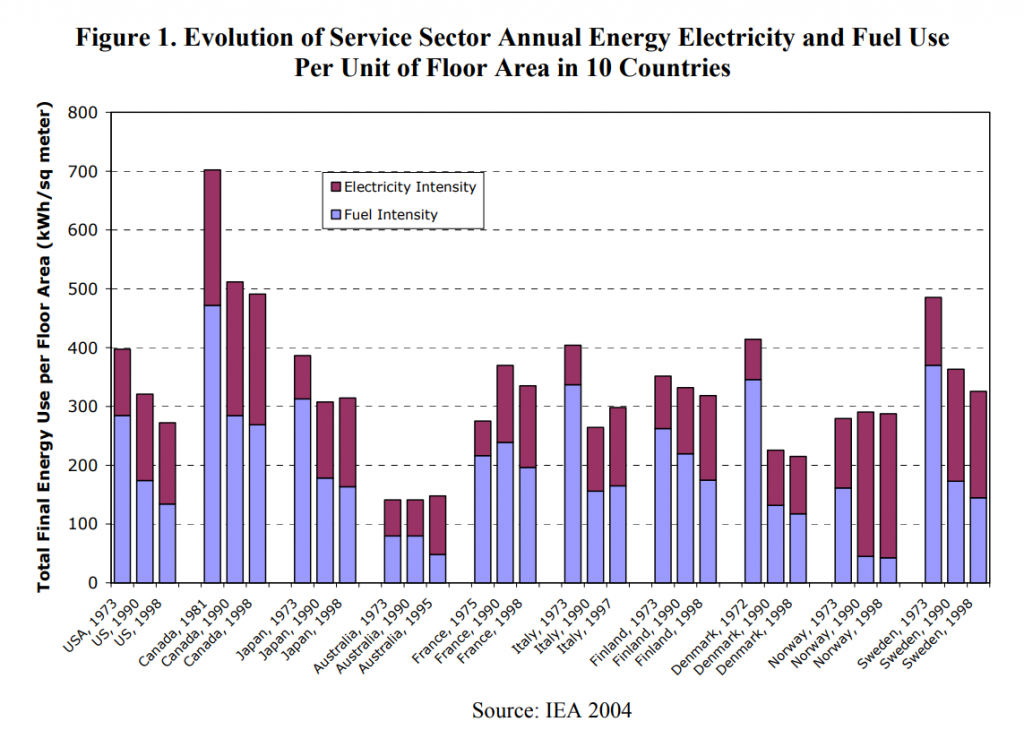 Note:  Energy Star Portfolio Manager, a program with similarities to NABERS operated by the US government, currently records 35,068 certified Energy Star buildings, out of over 400,000 benchmarked.  Energy Star claims that rated buildings have 35% lower energy intensity than typical buildings.   I’d call that an ineffective model for effective EUI management

NABERS mandates annual disclosure and rating, but only publishes current year data, so verifying improvement was a challenge.   As I looked for historical energy use intensity levels, I discovered that the International Energy Agency,  (IEA)  reported Australia, even twenty years ago,  achieved significantly lower EUI levels than selected northern other countries, and a whole lot better than Canadian buildings!

Note:  Climate differences alone simply don’t explain Australia’s performance. The major Australian cities, Sydney and Melbourne enjoy climates only slightly harsher than Los Angeles CA, and a little less harsh than Vancouver, but not at all like New York, Dallas, or Chicago.

Value is realized through lower energy/water costs and higher NABERS points which translate into premium prices on rents and resale.   Higher performing assets are simply worth more. 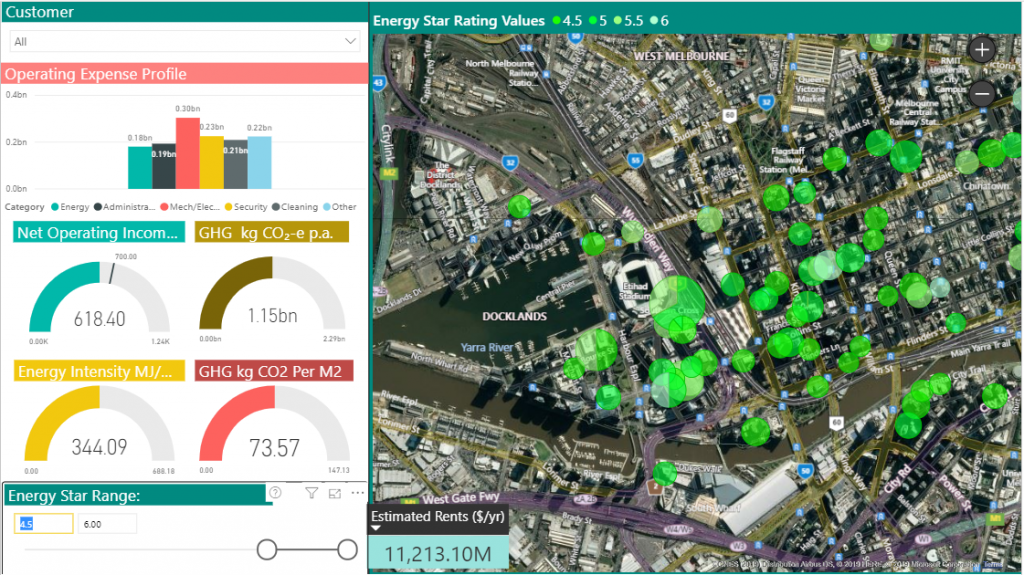 But NABERS doesn’t go far enough.  Technology has now advanced, to make change management more integrated, collaborative and cost efficient.   We developed much of that new technology developed here in Vancouver, at Builtspace.

Within just a few years every building, and the infrastructure and services around it, will have it’s own digital twin.  Thousands already exist.

Service processes are integrated into the digital twin, to ensure that the physical assets and their digital twins remain in sync.  Use maintenance analytics to optimize service and maintenance costs.

Smart building assets need to be managed too.  IoT devices, virtual networks, gateways, and the sensors themselves are integrated into business processes within the digital twin.  Use cyber-security analytics to maintain a secure enterprise and building controls environment.

Energy and water data, from the local utility company or in-building meters feed the digital twin near real-time data.  GHG emissions estimates by fuel source are used to build the GHG emissions performance indicators.  Use energy analytics to monitor and optimize energy/water costs.

Australia has shown us that energy efficiency/GHG reduction is good for the bottom line.

Back in Australia, over 90 percent of commercial buildings over 10,000 SqM (107,000 sqft) are operating at high performance levels, where GHG intensity (kg CO2/M2) levels are 70% lower than typical 1998 levels.   For real estate operators of these high performance buildings, profits are up.

Is NOI the silver bullet for our global climate emergency?  We think so.