If ‘we’ can’t reverse climate change who can? 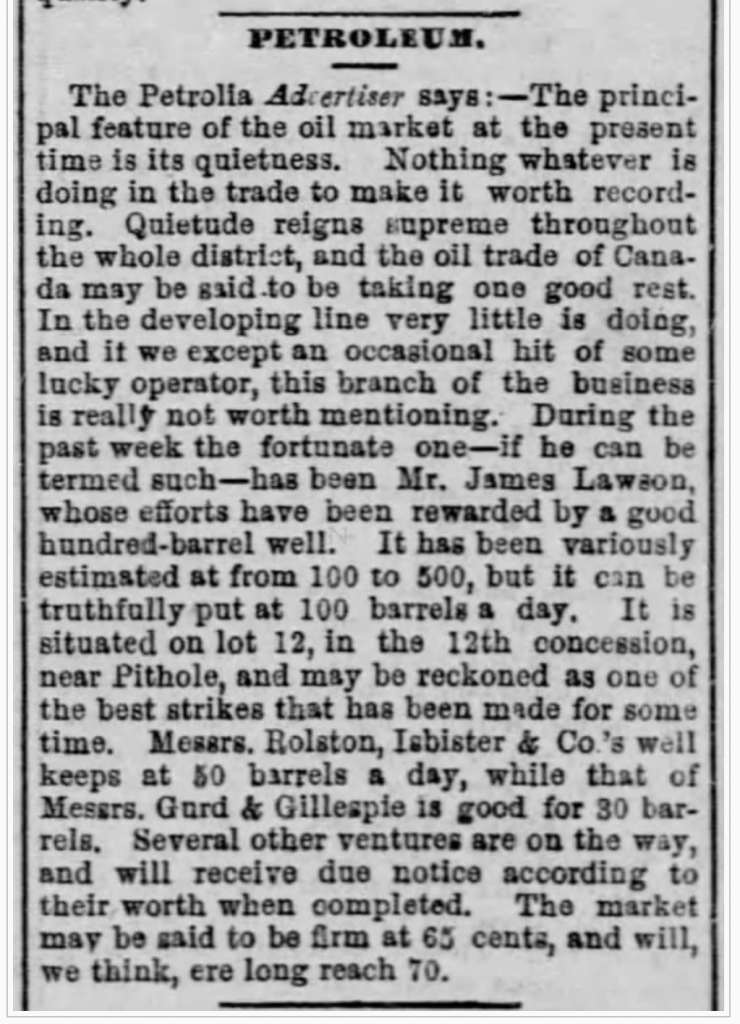 By 1879,  (great-Uncle) Thomas Rolston’s wells were producing 50 barrels a day, (a “notable” producer) with prices firm at about 65 cents a barrel. The Montreal Gazette September 4, 1879

In researching this post, I was very surprised to find that my own grand uncles and cousins were key innovators in petroleum…with grand uncle Thomas’ well producing 50 barrels a day, a ‘notable’ producer in 1879.

If ‘we’ started it, it’s appropriate that ‘we’ find a way to end it.

But, global climate change is a very complex problem.

There’s little doubt that Canadians would be financially worse off, without fossil fuel energy, but there’s also a large body of growing evidence that our economic prosperity comes with potentially very high environmental and social costs.

At the end of the day, no matter what your views, we have a problem!   While ‘climate change’ is on everybody’s minds these days, GHG emissions may not be the biggest problem our grandchildren face.   The true problem may be the economic turmoil as we transition away from fossil fuels.

Total Canadian crude oil production, most of which is coming from the Western Canada Sedimentary Basin (WCSB), is forecast to increase from 3.85 million barrels per day (b/d) in 2016 to 5.12 million b/d by 2030.[49]   Wikipedia

The health, safety, happiness and prosperity of our children and grandchildren depends entirely on what ‘we’ do with energy today, tomorrow, next week and next year.

I’ve always believed that history has a habit of repeating itself.  If we want to see what that future could look like, we need only to look back 150 years, when Canada started through the last big economic transition, to fossil fuels.

Here’s some of what I learned

Canada has been through an energy transition before, from whale oil to petroleum.

It could be argued that one man, Abraham Gesner, a Canadian doctor from Halifax who perfected the extraction of kerosene from petroleum in 1846, was ultimately responsible for the entire fossil fuel era, and global climate change.

Gesner thought he was finding a solution for the the high cost of whale oil, then primarily, and sparingly, used for lighting.

By the 1850s the whale oil supply was dwindling, with over 200 whaling ships scouring the oceans, to find fewer and fewer whales.  Costs were soaring with oil selling for about $67 per barrel (equivalent to $1,100 today),  With the transition to kerosene, lighting costs dropped by over 80%, and applications for petroleum use expanded.

Gesner’s kerosene innovation led to the first commercial oil production in North America, first in Oil Springs in 1858, then Petrolia Ontario, Canada (just a few kilometers away).   Production ramped up very quickly, and by the end of 1861, 400 oil wells had been drilled.   Similar discoveries were happening in Titusville, Pennsylvania around the same time.   In 1862, oil was flowing at 12,000 barrels a day in the Petrolia area.  By 1863, output fell to about 400 barrels a day. Then in 1864, declining supply sent prices to over $10/barrel (but still no where near whale oil).   Extreme volatility was the norm in the petroleum oil industry.

Then in 1867, the British colonies confederated, to form Canada.  Why?  They felt they needed to protect themselves from annexation.  With lots of resources, the colonies were ripe for military take over.

The principal feature of the oil market at the present time is its quietness.
The Petrolia Advertiser September 1879.

At the time, gasoline was considered a useless by-product of kerosene extraction, until the availability of gasoline led to  gasoline powered automobiles and trucks.   (My family was there too.  In the early 1900’s, Charles M Rolston (my grandfather’s first cousin) had relocated to Vancouver, where as manager of Imperial Oil, in 1907,  he created the very first gasoline filling station in Canada.) 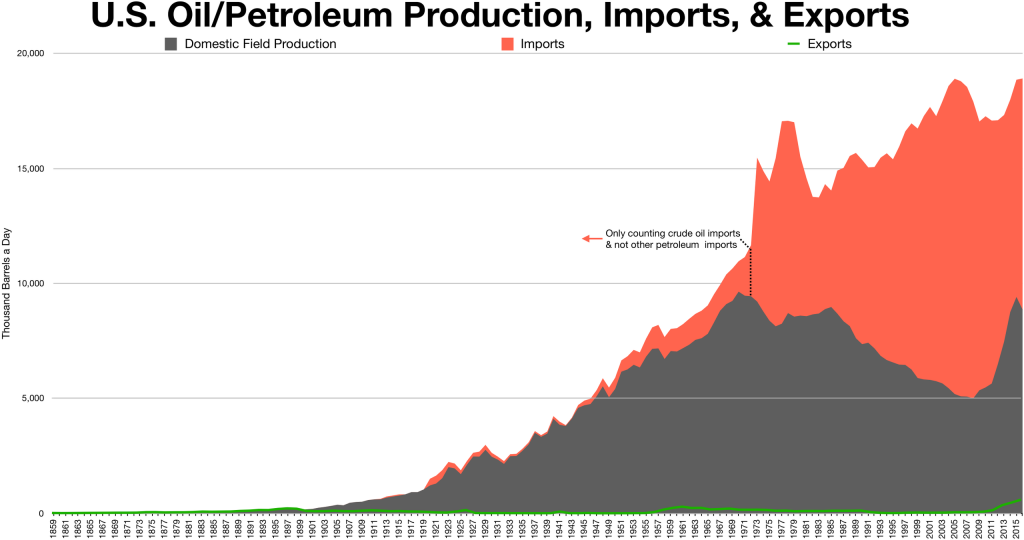 Today, Canada sits with over 120 years of proven oil reserves (169,709 million barrels), at our current rate of production and ability to deliver…but only about 27 years at current North American consumption.   We still have lots of resources, much of which is sent south to America.

I can only conclude that, it’s not a question of ‘if’, it’s when the fossil fuel age will end.  It could be tomorrow, or in 50 years, but it will end, but what will happen in the interim?

Volatility, scarcity, and ultimately cheaper alternative energy sources will eventually lead to the collapse of the petroleum oil industry.   When it ends, GHG emissions will necessarily end with it.    The entire fossil fuel era will be a mere blip in geologic time, spanning just a few generations from my grandparents to my grandchildren.

We need to take action now, to ensure prosperity for our grandkids

Greta Thunberg complains that the UN and government are not taking action.   She’s right, but she’s not talking to the right people.   I’ve learned from history that it’s individuals, like Abraham Gesner, my grand uncle Thomas, and communities like Petrolia and Titusville that led the change that ended the whaling era.

People, not the UN, the G7, G8, G20 or ‘G’ anybody else, will lead the transition, from the ground up.   We have the technology to find and replace inefficient energy consuming assets, and dramatically reduce, or entirely eliminate fossil fuels.    History has shown that high cost whale oil was replaced by lower cost petroleum, creating financial prosperity for millions (but unseen social and environmental costs as well).

Yesterday, from the Fraser River near Vancouver airport, the first flight of an all-electric commercial airplane, a converted 1956 Beaver floatplane  (an iconic Canadian aircraft) , took a test flight for the very first time.   Fuel costs for short hop flights are expected to be substantially less than traditional (kerosene) turbojet fuel.   Electric charging stations have replaced gasoline service stations in the downtown core.   For the built environment (the largest single source of GHG emissions), cities, not federal or international governments will lead the the charge to create safer, healthier, and more efficient zero-emission cities.

What about the financial impact?  Carefully managed, planned change can ensure a smooth transition with energy savings driving opportunities to rebuild our cities, towns and infrastructure for a more sustainable future.  For our part, BuiltSpace is providing the digital change management platform to manage change across our global built environment.

Together, ‘we’ need to fix it.  Nobody else can.